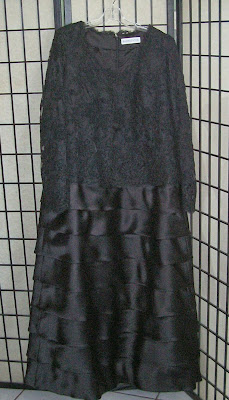 The dress is done and waiting to be pick up. I wish it would fit one of the mannequins, and take pics.
The bodice is made of Alencon lace lined with silk gazar, Rex Fabrics . It was underlined and fused interlined at the armholes, as well as padding to compensate for the difference from side to side. Shoulder pads were use as well. On the left side there is a 1” thick shoulder pad, and the right side a ½” thick.

Shoulder line, upper hip seam as well as some of the tiers, when hand on a hanger, would look slanted, the left side appearing shorter than the right side. I mention earlier, when she has the dress on, it all looks even. 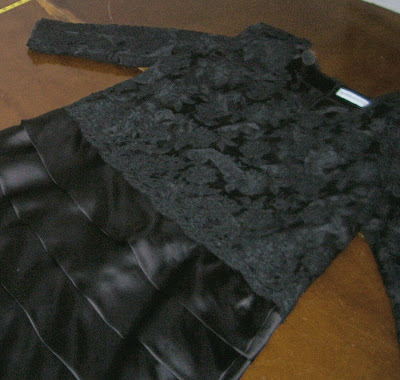 The skirt is made out 8 tiers cut on the bias and lined with silk organza, also on the bias. The tiers are sewn to a foundation made out of Taffeta.

Sewing the tiers was a real challenge, each tier should be 4 ½” long [ the part that actually is seen]. The skirt being an inch shorter on the left side, I had to play around with the upper tiers to get the optical illusion of being equal on both sides. This took me some time.

When making a skirt or underskirt that has tiers, often I measure the distance from each tier from the waist down, make the markings on the pattern and transfer to the fabric.
This time I had to start my way up.
With the skirt sewn, hem marked, I work my way up. Marked and attached the first 4 tiers [from the hem up] to the foundation.
Took the skirt, place it on the ironing donkey, marked the right side and stared working my way around the upper part. It took me some time to make the tiers look even from side to side.
First I try measuring, [making each tier a bit shorter than the last] and it did not work. I realized it was best to just eye balling it. So there I was pinning, looking, pinning, taking the skirt of the donkey and looking at it as it hangs, then … you get the idea!
Finally I was happy with it and when she came for the fitting it looked just fine. 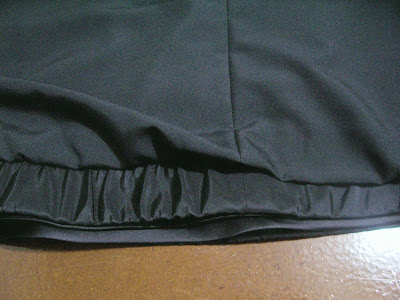 Posted by YAHAIRA BARRIENTOS at 9:57 AM

Beautifully done! You had a figure challenge which resulted in a design challenge as well with all those bias tiers. Very difficult, but I think you were right, just eye balling it was the best approach. Most people who do not make clothes or design clothes would not notice if it was off a bit - their eyes are not trained to see such things.

BTW, the wedding gown beading is beautiful! It reminds me very much of the beading in Kenneth King's bead book.

Congratulations on dealing with the hip differential and making a garment for your client that will keep secret her lack of symmetry. Your attention to details such as this must guarantee you many happy clients. Beautiful dress!

You said: "I realized it was best to just eye balling it". I think that is the art in it. Bravo!! And thanks for taking the time to share it.

Wow - what a challenge to balance the height difference on each site. I'm sure the new owner is going to love wearing her gorgeous new dress!

Lovely work! You've provided us with some great information on fitting figure differences. After all, most of us have some asymmetry in our bodies. I'm sure you client is going to be very pleased.

Your client will feel very comfortable wearing a beautiful dress that fits her perfectly!It is beautiful!

What a masterpiece, everything was well planned out and beautifully executed! Congratulations, I feel privileged for being able to observe your work!