I’m done sewing the netting to the skirt lining, Thank God! I thought I was doing to drown on netting and horsehair!

After sewing the two ruffles the pattern calls for, it was not enough fullnesss. Back to the cutting table it was, good thing I have a lot of netting and horsehair.

I cut another ruffle, making a total of 52yds of both, netting and horsehair. 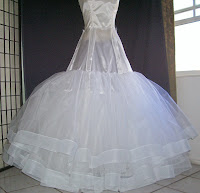 I like using the horsehair to hem netting, not only does it makes the netting stiff at the hem making it move way from the body giving it movement, and protecting the legs. Try hemming a long full dress the next time you make one and notice the different when you move on the dress.

It would be a good idea to use it also on long beaded dresse with a train, the horsehair would keep the train from getting in between the legs [Remember Ms. America on Miss Universe contest, 07 and 08!!! They both folded down when the train got caught on there heels] 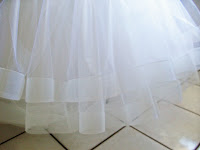 Horsehair comes in different widths. The most popular comes are 3”, 2 ½” and 2”.

You could see this hemming on the garment as well. I had seeing Silk chiffon dresses hemmed with a ¼” that was on Carolina Herrera dress.

John Galliano, is using this technique for the Dior Haute Couture dresses.
Here are some samples [I got these pics from the Oscar site]

Changing the subject, did you see the dress that Miley Cyrus wore for the red carpet? It is a Zuhair Murad.

I saw the dress on the Couture Fashion show [fashion Channel, yeah I wish I was there in person] When I saw the fashion show I knew I had seeing that dress before. Last night after getting a better view of the dress, I was sure I had seeing it. 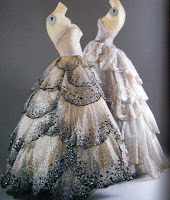 It was one of the dresses made by Christian Dior for his collection in 1949.

That goes to show, even Haute Couturiers get inspire by each other!
The next, is making the Toilet, doing some style changes, marking the placement of the beading, and transferring everything to the fabric.
Posted by YAHAIRA BARRIENTOS at 8:04 AM

The Christian Dior dress is absolutely phenomenal... I see the dress is coming out nicely. I can't wait too see the finish product.

Your work with the skirt lining is terrific! I won't forget about the hemming on the netting using horsehair... It makes perfect sense!

You have a great eye! The Zuhair Murad's dress is most certainly inspired in the 1949's Christian Dior, the similarities are tremendous!

I love this part of making gowns - all the underlining and support is fascinating! I feel the same way occassionally, with all the netting, but getting the final product to look like the image in your head is worth it.

QUESTION!!! DID YOU CUT THE BRIDAL NETTING ON A CIRCULAR (Like a circular ruffle) OR STRAIGHT ALONG THE GRAIN? I'M TRYING TO ACHIEVE THE SAME EFFECT ON THE HEM. HELP!!!

Vashawn, I cut the netting in long rectancular pieces, sew then to make a longer piece, then gather at one side [top] and hemmed the other. Good luck!